The Self Teaching Video of this form is now available. Catalogue Number is MTG224.

In just the same way that the Taijiquan form has been modified over the years to suit older people as in the Yang Cheng-fu version, so too have the sword and tai chi broadsword forms been. This does not take anything away from Yang Cheng-fu's form as it has helped many people to gain the great health benefits, those who would otherwise not have been able to handle performing the Original Yang Lu-ch'an form because of its athleticism and fa-jing movements etc.

In the same way, the beautiful Yang Family Tai Chi Broadsword too has been changed over the years to make it more like the Yang Cheng-fu version with softer and slower movements. However, the original Tai Chi Broadsword was also an excellent tool for great health. Nowadays, of course we are unable to defend ourselves using a broadsword, so it is the great health benefits that we gain from doing this form in its original context. 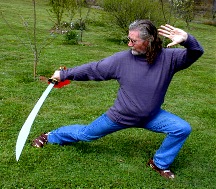 What this form gives you when done at a cracking pace, is firstly great exercise at the anaerobic level and when done a number of times at an aerobic level. We also gain internal balance not only of the Yin and Yang Qi levels but also balance in the chemicals and hormones in our body. In particular in balancing out the amounts of good calcium and phosphorus for healthy bones. There are a a number of movements in this original form which we now know scientifically cause the body to keep on building strong bones right up into older age thus helping to prevent osteoporosis. This form has a number of 'high impact' movements which we now know are essential for healthy bones. In long time studies of school children over many years, it has been discovered that those doing high impact exercises such as jumping as opposed to for instance swimming, had almost no osteoporosis into older age whereas the others had the normal levels of this disease state.

Ride Tiger Back to Mountain

Chang Yiu-chun taught me this form. I am only assuming that he learnt it from his own teacher, Yang Shou-hou as it is very much based upon the Old Yang style and not upon the Yang Cheng-fu version. In particular, the kicks and the 'Hitting Tiger Left and Right' are done almost the same as in the Old Yang style.

This form is energetic and does take a bit of fitness. However, if one begins slowly, performing it at the all slow pace, your fitness will slowly increase as will your general good health. 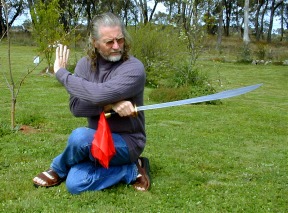 On a personal level, this weapon form is, along with the Taijiquan short stick form, my favorite of all forms as it is relatively easy and takes up little space (just look out for the light fittings if they are hanging low!) and only takes a matter of minutes to perform. However, when you are done, perhaps three times through, you will indeed be huffing and blowing as this is such a great heart and lung workout.

You don't have to purchase an expensive metal tai chi broadsword, as a wooden one will do just as long as it has some weight so that your upper body also gets a good workout.

The form begins with the traditional 'Step Forward to Open the 7 Stars 'salute' which is simply a way of getting the body into a relaxed or 'sung' state. This is very important as the fa-jing movements of stabbing, slicing, cutting, blocking and clubbing all require energy and there is a danger of the body becoming tense. Once the 'salute' has been performed, the form moves very quickly with many different types of fa-jing attacking and evasive movements including jumps and leaping kicks etc. Some really low movements like the postures from the Old Yang Style of Taijiquan of 'Sitting Like a mandarin Duck' are also included which exercise the hip joints, thus making for an excellent arthritis exercise as well as to 'keep a youthful appearance'. In other words, these type of movements work upon the body's life force mainly through the kidney, spleen and liver Qi. The posture known as 'Sleeves Dancing Like Plumb Blossoms' is also included which acts upon the re-balancing mechanism of the body. The mind is also given a great workout as you have to 'not think' about the movements, having them just happen sub-consciously and very quickly.

People of great genius invented this tai chi broadsword form over many years. They built into it a way of healing the body as well as (back then) a way of pure self defense unlike any other, other than a gun! Every bone, sinew and muscle is given a workout in a beautifully flowing tai chi broadsword form of yin and yang movements which emulates the 'Great River', often flowing gently and suddenly bursting into raging torrents.

I think that I have done Yang Shou-hou proud in presenting this form for the first time ever in the West in my own interpretation of what I have been taught. Just about everything that I have learnt over my now 35 years of study has culminated in this tai chi broadsword form.

All of the rules that apply to the Taijiquan empty hand form also apply to the Big Knife (Broadsword/saber) form. 'SUNG' is the most important part of this form as it is easy to get into tension using muscle strength because you are holding a heavy object. CO-ordination of the body when holding the knife is very important and this co-ordination is obtained by the practice of the empty handed form. During the practice of the big knife form, we must perform the movements of "Upper Cut", "Under Cut", "Cross Cut", "Chop", "Split", "Lift", "Stab", "Block", "Pull/Coil", "Push", and "Intercept and Parry". But do not worry about all of these as if you simply perform this form correctly, you will be doing all of them anyway.

3/. Wind Blows the Leaves. This is an important 'Sung' exercise where a wave of Qi moves up through the body causing the body to become 'Sung' ready for the form to follow.

8/. Push Knife Left and then Right.