Waving Form and its effect upon health and fighting

No other way of performing Taijiquan epitomizes the classic saying of The Energy is "Stemmed from the bubbling well point (K1), routed through the thighs, directed by the waist and manifested in the fingers". than the waving form of Taijiquan. It is not a particular style of Taijiquan as all style should have this higher level of doing its form. It is a way of performing the form. 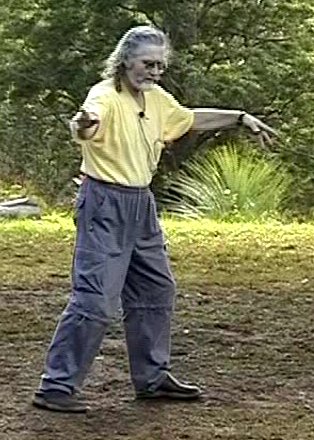 This way of doing Taijiquan more so than any other way, emulates the flow of internal Qi in the body. We need to emulate this flow because what the body does, so too does the Qi and if it cannot, then it is impeded as in many other martial systems which use unnatural movement.

The energy begins in the tantien, it is then instantly routed down to the K1 (bubbling well point) point where it can be used throughout the body for healing and for daily activity etc. The Qi comes straight up through the legs but when it gets to the waist (the flag bearer), it is turned into a whirlpool of spiral motion which continues in this way until it reaches the fingers where it manifests as physical movement for use in healing arts as well as martial arts. The initial movement through the waist is a larger waving type of movement which moves up and out of the arms causing the body to resemble some kind of flag flapping in the breeze.

This movement becomes smaller and smaller until it reaches the fingers where it is highly concentrated form of energy which can be used for fighting or for healing. This form is the epitome of the internal fighting arts where we have no technique, it has all become internal where just a touch of a hand or fingers will cause damage because they are so full of concentrated energy. This can be likened to a whip, where the initial movement of the handle is rather slow and large and then as it goes along the whip rope, it begins to get smaller and smaller and concentrated until at the tip of the whip, it will tear flesh off bones! But the initial movement would not hurt anything! 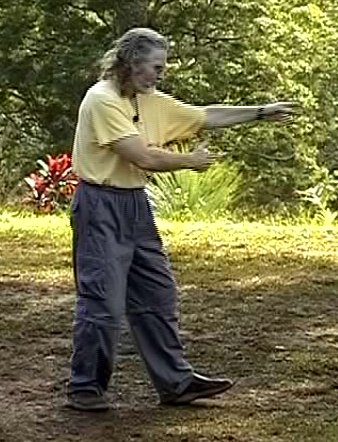 You cannot actually 'teach' waving form, it must be observed and seen in one's mind's eye so that at some later stage when one is ready for this level of practice, your body will begin emulating what was seen and which has gone internal. However, I have discovered that by taking some of the more prominent movements from the form, and showing them over and over, students begin to learn the way of doing waving form more readily. At a recent International training camp I taught these training methods to gain waving form and many of the participants were beginning to get it towards the end of the camp.

The waving form is always done at a much faster pace than the other ways of practising form. However, everyone does it differently. For my own practice I have not changed in time since I began doing it some years back, 13.5 minutes for the whole Yang Lu-ch'an form. I know that Master Li (shown on my recent video production of Waving Form) does it in 12 minutes.

I have only ever seen two people practicing this way of Taijiquan, my own teacher Chang and Master li in China. When both men did waving form, their body looked like what the wind would look like if we could see it, or like smoke being moved around by the breeze.

The movements of the hands and arms become much smaller and slightly higher up than in normal forms. Thus when we do for instance the group of postures known as "Wave Hands Like Clouds', the hands and arms emulate clouds dancing in the sky much more as the hands are much higher up and smaller in circle. This way could also be termed to be a 'small frame form' whereby the Yang part of the body (legs and hips) still make the larger open movements while the upper body becomes much smaller to completely balance out the lower portion with Yin.

Once you have this way of moving, your external body will emulate the internal flow of Qi thus giving you perfect internal balance and giving your body the best possible chance to heal itself. And in the fighting area, it is your Qi that reacts first when you are attacked. The problem is that our physical body becomes less attached to our internal body (Qi) as we age because of the way we live etc., so we react physically too late to any attack. So if you can get your external physical body reacting at the same time as your Qi, then you will also react much quicker at a reflex rate! And the waving form will give you this.